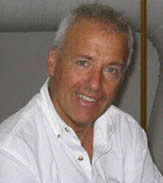 Marc Sadler
Is an accomplished designer with more than four decades of experience working for leading companies in a variety of sectors. He has been Ideal Standard’s European Art Director since 2002.

Sadler obtained a degree at E.N.S.A.D (Paris) in 1968 and was awarded the Brook Stevens design prize in the same year. He began his career working in the sports sector, collaborating with Caber (Italy). He later patented Caber’s symmetrical shell design that remained the most successful ski boot of its kind for several years. Sadler then created his own studio with staff specialised in modelling and technical development, offering his customers an “all-inclusive” package of services, from conception and design to product development. After opening branches in New York, London, Taiwan and Venice, Sadler recently established offices and residence in Milan. The knowledge of materials and working technologies he gained from working in the cutting-edge sports sector, including a 20-year collaboration with technical and protective sportswear leader Dianese, allowed Sadler to expand into other industries where design in the classic sense is more established.

Today Sadler designs furniture and furnishings, including electrical and domestic appliances, lighting, and technical products. He also collaborates with companies like Cassina, Fiam, Foscarini, Graepel, Kartell and Magis in furnishings and lighting, and develops concepts for Moulinex, Krups, Daewoo Electronics, and F. Illi Guzzini (Italy). Sadler teaches in several design schools and universities, including the Domus Academy and the Institut Europeo di Design, Milan; Enschi les Ateliers in Paris, and the Royal College of Art, London.

In 1998 his “Motorcyclist’s Back Protector” was included in M.O.M.A’s permanent collection.
Sadler was born in Innsbruck (Austria) is a French citizen and currently lives in Milan (Italy).