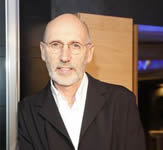 Robin Levien,
52, was born in London, where he has his design studio on the South Bank.
Robin splits his time between his live/work apartment in London and his house in Somerset.

Robin’s interest in ceramics stems from school days. Shortly after graduating from the Royal College of Art in 1976, Robin worked with his ex Professor David Queensberry and later became a senior partner in Queensberry Hunt Levien.
In 1995 Robin became a Royal Designer for Industry, a distinction that is limited to 200 designers at any one time.
Since 1999 Robin and his partner Tricia Stainton have run their own company, Studio Levien, concentrating on designing domestic products for leading international companies. Robin oversees all design work and is closely involved with every project in the studio, which employs four other designers Dave Tilbury, Matt Brett, Caroline Aston and Steve Booth.
Robin’s work is in the permanent collection of the Victoria and Albert museum in London. He is heavily involved with the Royal Society for Arts and chairs one of the society’s Student Design Award judging panels.
In 2003 Robin was invited to be the Non Executive Design Director of Ideal-Standard UK, the directors of which he has had a close working relationship with for over 20 years.
Robin is a member of the Council of the Royal College of Art in London.
Since 2006, he has been an Honorary Doctor of Staffordshire University.
Robin’s work has been recognised with Awards by: